Pontius Pilot stood in the presence of the only begotten son of God, the Lord Jesus Christ, and uttered these infamous words: “What is truth?” (John 18:38). The words of the Savior that prompted the rhetorical question of Pilot were: “Thou sayest that I am a king. To this end was I born, and for this cause came I into the world, that I should bear witness unto the truth. Every one that is of the truth heareth my voice.” (John 18:37).

We can only suppose that, at the time, Pilot was not one “of the truth” (ibid) and could not hear the truth spoken by the Lord. We could feel some justified judgment well up inside our hearts and indignation if it were not for the fact that many of us are guilty of the same sin as Pilot, he did not hear the truth spoken by the Lord because he only attuned his hearing to the secular world around him. The Roman Political system and Grecko-Roman Culture spoke much louder than the words of Christ.

Media, popular voices, and political echo-chambers are no less an influence, trying to declare the truth in our day. We can almost pick any topic from the news headlines and our-truth may very well be set-in-stone due to who or what we allow into our thoughts.

This is like the people in the church at Corinth, at the time of the apostle Paul. They were living in a pagan city that did not have the same views on death and resurrection as followers of Christ and the early church.

The common belief in Corinth is that the human body was a prison for the soul of man, and it was only free once death fell upon its victims. This belief simply removes the “Hope” in the gospel message, the gospel tells us that the sting of death is removed by the redemption and atonement of Jesus Christ. Christ Conquered death and sin. God will take the Faith of the Christian and allow the corruptible man or woman to be put in a grave and Jesus’ resurrection and atonement would raise that man or woman to an incorruptible state, that is free of sin, being no longer subject to the adversary and temptation. Christ overcame death and hell.

Watch how Paul in 1 Corinthians 15 renews hope in Corinth. He does this by pointing out what a pitiful plight we would have if his preaching and testimony of Christ was done in vain. How we would be trapped in our sins and lost if he was a false witness and the words of the Savior to Pontius Pilot were not the truth.

For us, Paul puts the “shame culture” on notice. A culture that values popularity and punishes those who don’t go along with the common culture and the voice of an unholy democracy.

The resurrection is the focus of the Church, and this resurrection is extended to all. When that resurrection day comes, “Death is swallowed up in victory” (1 Cor 15:54), and thus we see hope in the message of the gospel.

Paul writes a letter in response to some in the church at Corinth, who do not have a correct view of resurrection.

The Importance Of The Resurrection

2 By which also ye are saved, if ye keep in memory what I preached unto you, unless ye have believed in vain.

3 For I delivered unto you first of all that which I also received, how that Christ died for our sins according to the scriptures;

4 And that he was buried, and that he rose again the third day according to the scriptures:

5 And that he was seen of Cephas, then of the twelve:

6 After that, he was seen of above five hundred brethren at once; of whom the greater part remain unto this present, but some are fallen asleep.

7 After that, he was seen of James; then of all the apostles.

8 And last of all he was seen of me also, as of one born out of due time.

9 For I am the least of the apostles, that am not meet to be called an apostle, because I persecuted the church of God.

11 Therefore whether it were I or they, so we preach, and so ye believed.

12 Now if Christ be preached that he rose from the dead, how say some among you that there is no resurrection of the dead?

13 But if there be no resurrection of the dead, then is Christ not risen:

14 And if Christ be not risen, then is our preaching vain, and your faith is also vain.

15 Yea, and we are found false witnesses of God; because we have testified of God that he raised up Christ: whom he raised not up, if so be that the dead rise not.

16 For if the dead rise not, then is not Christ raised:

17 And if Christ be not raised, your faith is vain; ye are yet in your sins.

18 Then they also which are fallen asleep in Christ are perished.

19 If in this life only we have hope in Christ, we are of all men most miserable.

The Results Of The Resurrection Of Jesus Christ

20 But now is Christ risen from the dead, and become the firstfruits of them that 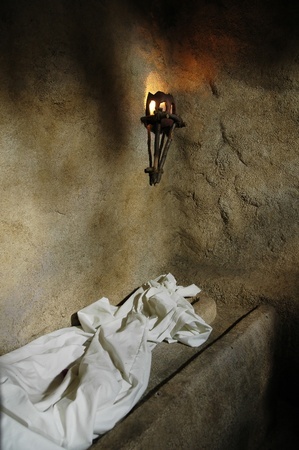 22 For as in Adam all die, even so in Christ shall all be made alive.

23 But every man in his own order: Christ the firstfruits; afterward they that are Christ’s at his coming.

25 For he must reign, till he hath put all enemies under his feet.

26 The last enemy that shall be destroyed is death.

28 And when all things shall be subdued unto him, then shall the Son also himself be subject unto him that put all things under him, that God may be all in all.

30 And why stand we in jeopardy every hour?

31 I protest by your rejoicing which I have in Christ Jesus our Lord, I die daily.

32 If after the manner of men I have fought with beasts at Ephesus, what advantageth it me, if the dead rise not? let us eat and drink; for to morrow we die.

34 Awake to righteousness, and sin not; for some have not the knowledge of God: I speak this to your shame.

35 But some man will say, How are the dead raised up? and with what body do they come?

36 Thou fool, that which thou sowest is not quickened, except it die:

37 And that which thou sowest, thou sowest not that body that shall be, but bare grain, it may chance of wheat, or of some other grain:

38 But God giveth it a body as it hath pleased him, and to every seed his own body.

39 All flesh is not the same flesh: but there is one kind of flesh of men, another flesh of beasts, another of fishes, and another of birds.

42 So also is the resurrection of the dead. It is sown in corruption; it is raised in incorruption:

47 The first man is of the earth, earthy; the second man is the Lord from heaven.

The Day Of Our Resurrection

50 Now this I say, brethren, that flesh and blood cannot inherit the kingdom of God; neither doth corruption inherit incorruption.

51 Behold, I shew you a mystery; We shall not all sleep, but we shall all be changed,

52 In a moment, in the twinkling of an eye, at the last trump: for the trumpet shall sound, and the dead shall be raised incorruptible, and we shall be changed.

56 The sting of death is sin; and the strength of sin is the law.

57 But thanks be to God, which giveth us the victory through our Lord Jesus Christ.

58 Therefore, my beloved brethren, be ye stedfast, unmoveable, always abounding in the work of the Lord, forasmuch as ye know that your labour is not in vain in the Lord.